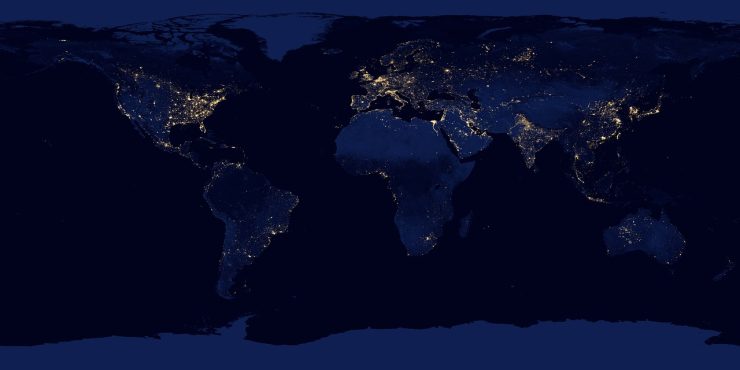 Many thought leaders have often been vocal in their stand for bringing about a disruption in the upstream Earth Observation (EO) segment. As many of our industry peers have also figured out, performing analytics over large areas for commercial applications using EO imagery has been more than a bump on the road. As of today, potentially, there are hundreds, if not a thousand, applications of satellite imagery. The commercial applications in the environment and agriculture sector could boom by standing on the shoulders of giants such as ESA’s Copernicus programme and the Landsat and  MODIS open data program from the U.S. government. Have we seen a similar, if not repetition, of the path in other commercial verticals like infrastructure, utilities, roads, housing, insurance etc.? There are no prizes for guessing the barriers to entry, for an industry entrant trying to find a foothold in developing countries or an idea trying to prove its viability in a university lab. In our previous article, we talked about the various issues in the downstream segment, in brief. In this article, we dive deeper and exhaustively attempt to find the bottlenecks and root causes of the massive gap between the demand and supply of high-resolution EO imagery.

Pricing is the first pain point for any commercial user trying to adopt satellite EO data to solve their problem. Considering that most of the hi-res optical satellite operators originate from the US, they mostly serve the US DOD and US Government (NGA and others). Few of the new constellations have even openly announced US DOD to be their primary customer with little incentive or initiative to make hi-res satellite data more commercial to achieve economies of scale1.

It is common knowledge that the space segment demands huge investment in platforms and ground infrastructure. And we established that these were designed to the needs of a single customer with a near bottomless purse, defence. Platforms became expensive as general expectations revolved around longer lifetime, highly redundant system architecture and exhaustive qualification phases coupled with zero risk tolerance. When subsystems and components are designed with these philosophies, the cost build up from a product assurance point of view is massive. Even more, the gestation period of such technologies could sometimes run into years. A typical prime would deliver and commission such a state-of-the-art platform where the expenses could potentially be in hundreds of millions and possibly touch a decadal mark for launch. So when does the return on investment (ROI) break even? We need to explore the factors and dynamics of client requests to glean the dynamics of the pricing structure.

It is expected to be bombarded with a range of questions when a user approaches to purchase hi-res satellite earth observation data. This will only throw the user into disarray. Consider a user who is new to the EO industry and considering using EO data for a particular application. After going through the process of finally obtaining the data, the user would be discouraged to consider using satellite EO data in the future.

The cost, which was expected to drop with the emergence of small satellites, low-cost COTS components and competition, hasn’t decreased at the rate at which the market research companies have predicted (3-5% decrease per year). This is mainly because the demand is not elastic and driven by strategic customers. Satellogic and Blacksky have promised archived imagery pricing to be around 2-4 $/sq.km. But the location of archived data is mainly driven by the needs of anchor high-paying customers. The defence will remain the largest market for hi-res commercial satellite EO data. And specifically, in the US, NGA is the largest procurer of commercial hi-res EO data in the US, and, if not wrong, the world is the largest in the world. Furthermore, the cost is primarily controlled by a few satellite operators making it prohibitive for commercial use cases in this part of the world. Even in the UK, according to Satellite Applications Catapult Report2, their interviews found that the primary barrier for usage of hi-res commercial satellite EO data was high cost of data. It is high time that the satellite operators realize the need for servicing the customers at a cost that is affordable that will result in large-scale adoption of commercial hi-res satellite EO data.

As per McKinsey’s 3 report large part of the space economy, today is data-driven. So, reliable access to quality data at the right time is a primary requirement for an applications company. There are increased number of marketplaces now from where data can be brought when compared to a couple of years back. Few newspace satellite operators and data aggregators are working to make access to data a little easier for users with transparent pricing strategies and building a platform along with aggregating data from different suppliers. And marketplaces are even putting up guides to help users to buy satellite data4.

But the process of buying the data is still a convoluted journey. And considering most of the vendors are overseas, the additional legal and financial setup results in a longer lead time  Further, there will almost never be archived imagery for a chosen area, and in case tasking is essential, you will always be a second priority after large government or institutional customers. This creates a bottleneck for the innovation of the application of hi-res EO data for commercial use cases.

Other issues in access to hi-res data are captured below,

Most hi-res optical satellites have payloads based on reflective telescopes, which either use a Ritchey–Chrétien type of Cassegrain telescope design or a Three Mirror Anastigmat (TMA). The designs have a long heritage and result in excellent data quality. Also, they have very few optical elements helping reduce the complexity of the design and are less prone to optical aberrations when compared to traditional reflective telescopes. The design also allows going for maximum GSD by optimizing the aperture of the primary mirror and the focal length of the telescope. But the design inherently results in a low field-of-view (FoV). Hence most hi-res optical satellites usually have a low swath, which ranges from 5 km to 25 km. Some of the most lucrative commercial applications of hi-res satellite imagery require large area image acquisition, demanding these large areas to be imaged in a short span of time to meet the SLAs of the customers. As observed, currently, hi-res data is associated with a low swath. Hence the concept of operations (CONOPS) of satellites is not suitable to deliver the requirements of such ‘large area analytics’, despite satellite imagery being under the ‘Big Data’ category. And with applications that call for nadir pointing images, the period required to cover the area shoots well beyond the specification for the use case.

Comparison of swath and resolution for few hi-res optical satellites

SatSure performed a preliminary analysis with 3 different hypothetical constellations to understand the service level deliveries that can be achieved for a medium sized area of interest – 30×30 sq. km. with a near-nadir coverage. It can be observed that even with 21 satellites with a swath of 5km, it would approximately take 20 days to cover 90% of the area. This is unacceptable to meet the SLAs of 15-20 days where a solution or product has to be delivered. This can be mitigated by going for a sensor with a larger swath. Hence hi-res with large swath is the next big opportunity for the EO industry.

Coverage Scenes for Constellations A and B

But the problem is not solved just with hi-res and large swath sensors, as this will result in a large volume of data being downlinked. Though edge processing is gaining popularity in the EO industry, the use cases for which the AOI is being imaged must be well-understood to benefit from edge processing. Often, edge processing is used or proposed by companies, where it may be overkill5. Efficient use of edge-processing integrated with CONOPS which is directly linked with data products, will result in the best value.

When our team recently reached out to a commercial hi-res EO satellite operator, they found that it would take around 34 days to cover an area of 180 sq.km. with a constraint on maximum off nadir of 5 deg. When a customer needs a service delivery of 15-20 days, this CONOPS does not meet the requirements of the downstream industry. Further, SatSure recently concluded a servicing a key customer where an area of size 2000+ sq.km. had to be analyzed using hi-res optical archived imagery, where objects such as different type of power transmission towers had to be identified. For catering to such recurring large area analytics requirements, it is imperative to automate the data processing chain for a product. And this automation will be efficient if the data is from a single sensor or multiple sensors with almost identical characteristics.  As identified before, commercial users are always on second priority after primary anchor tenants. Cloud cover issues in tropical regions deteriorate the tasking and turnaround time to image and obtain the data. Hence current hi-res satellite constellations are unsuitable for large area EO data analytics. Innovation in payload design and CONOPS is necessary to solve this issue.

Afterthought: The Huge de-Link between upstream and downstream EO sector

Basically, even if today some downstream analytics company does find a product-market fit, chances are that they won’t be able to scale it because of all the reasons mentioned earlier in this article. Further, at the top of the pyramid, even if satellite operators build a platform with a hi-res sensor with a large swath as identified in the earlier section, there still exists a gap in delivering value to the end user  Satellite operators have little or no incentive to solution with end users of such data, who might not even be aware the value of such data in solving some core business efficiency problem more so because sticky and lucrative defense contracts are keeping the RoI question by investors away.

EO value chain and perspectives at each level

A satellite operator has a very high-level knowledge of the industry verticals for which the AOIs are being imaged. The traditional hub and spoke model of distribution of only images to distributors is good enough for showing revenues beyond the defense sector, resulting in imaging parameters or metrics that might actually not be very useful. If there was a way for establishing a constant feedback loop between the end user (product/platform teams) and the satellite systems (the operator), then only can one have seamless integration of EO data and applications/solutions into existing business processes of different industries and their workflows, to capture the enormous value that is otherwise going untapped.

3  The role of space in driving sustainability, security, and development on Earth | McKinsey

4  A Definitive Guide to Buying and Using Satellite Imagery · UP42

Finding the Right Fit The growing competition and the advancement of technology has led farm machinery companies globally to innovate on technology and business models. One such business model idea is farm equipment-asmore

The Indian seed industry has grown and  evolved over time. Earlier, seeds were saved from previous crops to be used for upcoming seasons. Today, hybrid seeds are being widely adopted due to increasing food demandmore

Role of Open Data in the Geospatial World

Written by Arjun Gangadharan, Team Lead- Geospatial Operations at SatSure Why do I need to contribute to open data? Well, the valid question is, why should I share my data with everyone, which I created with my moneymore